One last blast in Honkers before heading back to Blighty

This is what Hong Kong used to look like, perhaps some 90 years ago. On the right centre they’re constructing what used to be an artificial harbour and dock for visiting military ships in Admiralty. See the island top left? That’s Stonecutters, which became the base of British military forces in colonial times. Top right is the tip of Kowloon, where the Star ferry still stops between Hong Kong and Tsim Sha Tsui.

Hong Kong was my first home in Asia almost 21 years ago. And the skyline then looked nothing like it does today.

This is Hong Kong harbour today, from almost the same spot, but not as wide. But Stonecutters is now firmly attached to Kowloon and pretty much all of the top right of the landscape didn’t exist even 20 years ago. That tower is the International Commerce Centre and that’s appeared in the last ten, all built on reclaimed land.

The harbour overall is considerably smaller than it was 100 years ago. You can just see the dome of the former Legislative Council building on the waterfront at the bottom on the picture. That’s now perhaps 800m inland maybe more.

When I lived here I was not disabled, so the things that drive me nuts now were not even in my mind then. But I can think of countless bars and restaurants that I wouldn’t be able to enter now.

(Mind you, given that Hong Kong’s famous bar street  Lan Kwai Fong, where I consumed my fair share of alcohol, is built on a hill, that might not be such a bad thing today 🙂 )

But everyone’s experience is different.

It would be a challenge to get on it but definitely worth the journey. As it was, I went by taxi and did the trail around the top of the Peak along Lugard road. We stopped here beneath the root fronds of a magnificent Banyan tree 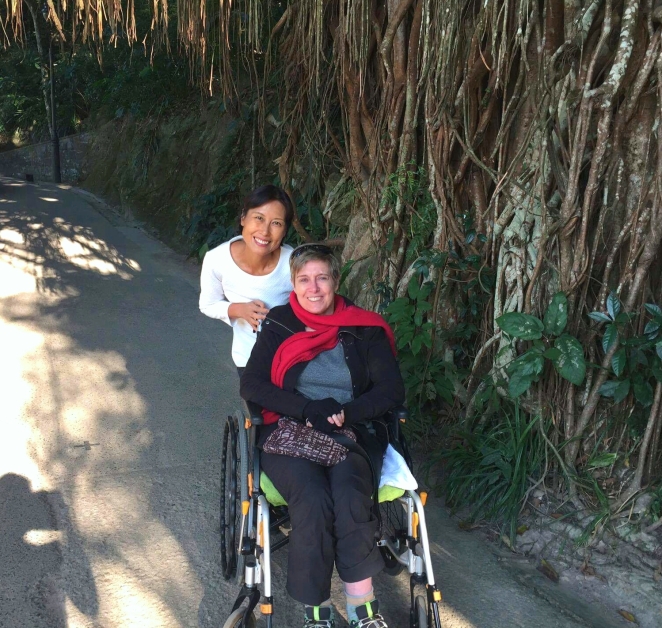 It wasn’t particularly warm, about 15 degrees perhaps, hence the fleece, scarf and gloves. burr. It’s cold when you’re used to 30 degrees every day.

So getting around – the taxi drivers in Hong Kong are pretty good about helping disabled customers in and out of their cars. But if you don’t want or can’t move from your chair there are two cab firms set up to help people in wheelchairs.

There’s Syncab which I took to the airport, and have taxis that operate across Hong Kong, including the New Territories (green cabs) and Lantau island (blue cars)

And theres also Diamond Cabs which offers a similar service. So that’s a big plus.

Hong Kong has also produced an online accessibility site Hong Kong guide which gives some pointers as to what you can do. But do check the hotels individually. Just because it claims to be wheelchair friendly doesn’t mean it is.

I chose Lanson Place from previous experience.  The toilet was great – a raised seat and two railings (woohoo).

The shower area was tricky, but not impossible.

So I survived the weekend unscathed, caught up with a bunch of mates and of course had my last Chinese meal (for a while at least) in China. 😪

OK bit of a quick one. Just have a read through of these links about a disabled passenger’s experience flying Malaysia Airlines out of Borneo

I’ll direct the CEO towards my blog about Hong Kong

The highs and lows of Chek Lap Kok

Hong Kong International Airport is built on an artificial island, constructed after engineers blew up the two small islands of Chek Lap Kok and Lam Chau to the north of Lantau and levelling the debris.

HKIA is now one of the region’s busiest airports, handling more than 68 million passengers a year.

But being one of the busiest does not always mean the best. On my long weekend trip to Hong Kong I had problems both on arrival and leaving Hong Kong.

Generally when I fly I’m the last person off the plane either because ground staff are digging my chair out of the hold or I’m waiting for the airport wheelchair pusher to arrive. My flight from KL arrived on time (after leaving at the inhumane time of 08.40am, which meant getting up 4.30am 😦 )

My chair was retrieved and I left the aircraft. And that’s where I stayed. 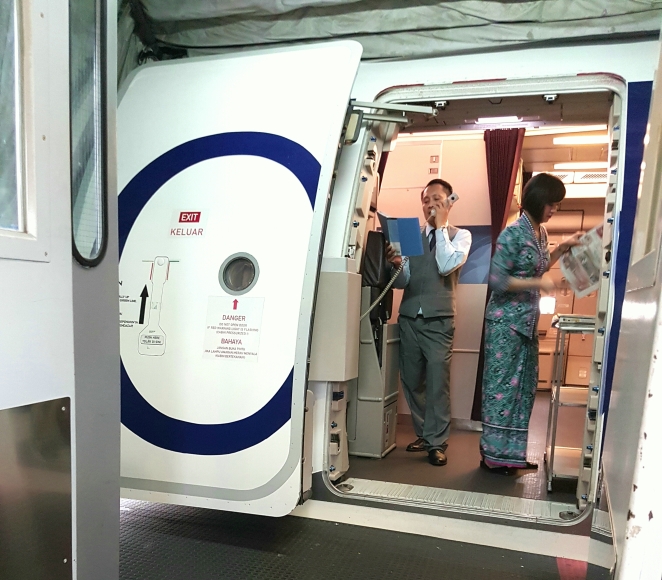 The airline rep who helped me off the plane abandoned me after few minutes and the minutes ticked by and ticked by.

About 30 minutes after leaving the plane I had given up waiting and found a helpline phone.

No apology for the inconvenience, more a lecture about why hadn’t I told the airline I was in a chair. Fairly obvious I would have thought. But no one had called ahead.

Then a brief encounter. I got excited.  🙂

A wheelchair pusher appeared. I got hopeful. 😄

She shouted into her phone in Cantonese. I got confused.😕

She turned and left. 😪

Then an airport rep showed up. 🙂

We didn’t know you were coming. 😕

And so I waited some more, spending time venting on Facebook.

About 90 minutes after landing a wheelchair pusher finally shows up. She makes a fuss over me having a trolley bag, (I can’t have one?) but given the look on my face she wisely chose not to make an issue of it.

But it wasn’t over. By the time we’d gone through immigration (and I have Hong Kong PR, so don’t have to queue) about two hours had gone by.

Now to launch a search and rescue mission for my suitcase. ‘Cos it sure as hell wasn’t at baggage reclaim😡😪😡😪😡😪😡

30 minutes later, bag retrieved from the ‘abandoned baggage department’ (who knew?) I’m in a taxi, almost three hours after touching down.😄

But somehow the cloud hanging over Hong Kong airport found a silver lining. A very old friend of mine from Australia was in Hong Kong on her way home from a trip to the UK.

And she was only there because she’d missed her flight in London and had been delayed several days.

She saw my Facebook posts and came and found me at my hotel. 😀 😀 😀 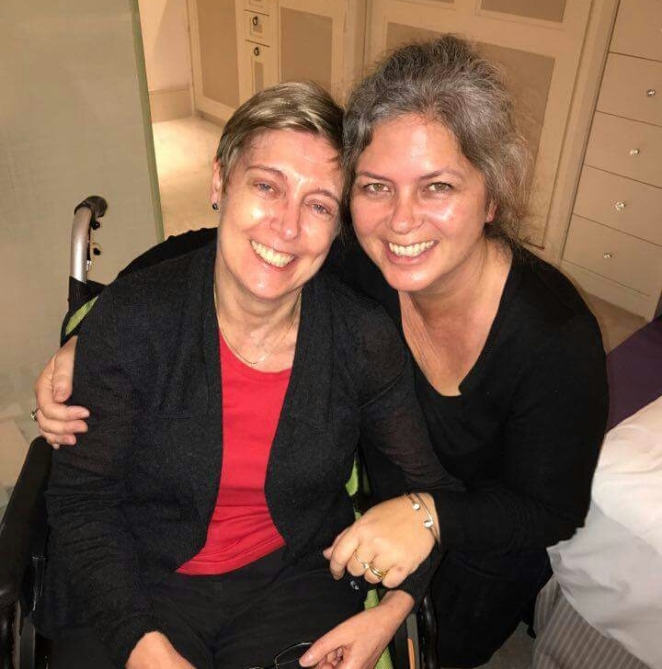 The entire episode was almost identical to the experience of disabled BBC correspondent Frank Gardner who got left on a plane when wheelchair helpers also failed to show up at Gatwick airport in the UK. You can read his story here: Frank Gardner

More on my weekend in Honkers in a later blog, but to get to the airport on the way out of Hong Kong the hotel did book me a disabled friendly taxi. A bit like the one in Bangkok.

But his assistance ended on pulling up at the terminal.  HKIA, unlike KLIA, has no kerbside assistance for the disabled, (when flying Malaysia Airlines) so a solo wheelchair traveller has three basic choices:

1.Miraculously find the ability to wheel yourself and a suitcase down a slope, and get the same to your check-in desk at least 50m away.

2. Ask the taxi driver to leave his vehicle, at the risk of having it towed or destroyed, to do the same.

3. Pay someone from the hotel to do a return trip to the airport to again do the same.

I chose option 3. Double the cost of the taxi fare.

And that should have been the end of the story.

But no. Wheelchair pusher shows up. Deposits her handbag, water bottle and other crap over the handles of my wheelchair and refuses to pull my wheeled trolley bag.

She can’t hold its handle and my chair because all her shit is making my chair handles hard to hold. She wants me to place the bag between my legs, something I cannot physically do.

An awful lot of time wasting later, and no chance to shop at duty free, problem solved.

At least, it was uninvited but enthusiastically received: