Progress at last and other toilet tales

Who knew when I began my journalism career 30 years ago that it would come to this? Writing about the places we all need but don’t like talking about.

This sign covers the entry to the loo at Gleneagles Hospital where I got stuck in September  and had to be rescued. You can read the entry here: Oh dear what can the matter be

I said at the time I was not going to hold my breath at the chances of an upgrade, but wonders never cease. Here we are a few months later. I’ll do an inspection when the work is done.

Meanwhile Prince Court hospital is also beginning work to upgrade its facilities to be more accessible. That after numerous emails complaining. It would be so much easier if the places were built properly in the first place.

Over the weekend I flew to Thailand to catch up with an old friend in Bangkok – more on that coming in a following blog. I travelled up with AirAsia, an airline I don’t normally use. But they fly from the new KLIA2  low cost terminal at Sepang. So what would their facilities be like? (They suck at the main KLIA terminal) 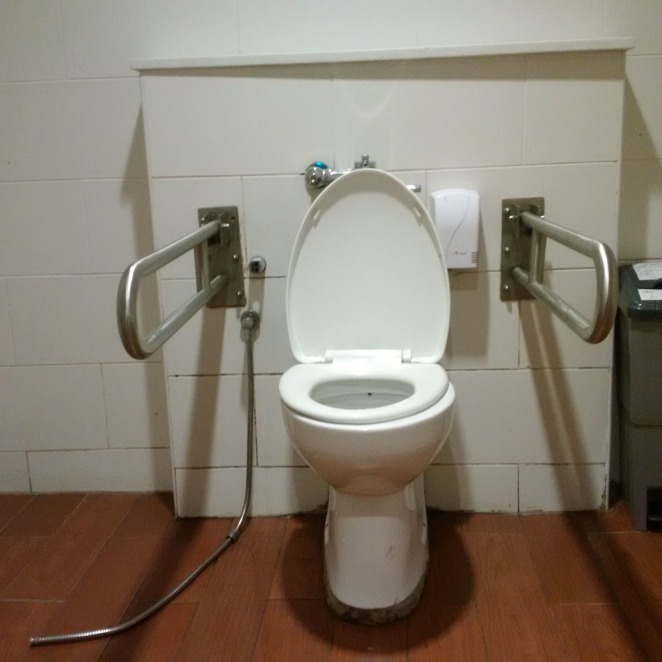 Ta-daah. Woo hoo. No you are not seeing things. There are TWO railings, not none, not one but TWO. Is this a first?

Mind you it wouldn’t be British of me if I didn’t find something to moan about right? Toilet paper? Is that too much to ask?

The hose didn’t work, and even if it did I’d still need paper to dry my derriere.

So 7/10 for the effort guys, just lacking the finishing touches to avoid a soggy bottom. 🙂