The US government’s trying to make things better for the disabled too.

The US government IS bigger than me, much bigger. And they’ve been doing it a whole lot longer. And, admittedly, they’ve got a lot more clout than yours truly  😉

But earlier this month I had the opportunity to take part in a joint phone interview with Judith Heumann, who is Washington’s Special Advisor on Disability Rights. 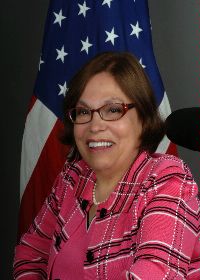 Judith’s been campaigning for disabled rights for more than 30 years, under various US governments and at the World Bank, where she was their first advisor on disability and development. So she knows her stuff.

And she knows exactly what it’s like to be disabled. She contracted polio as a baby and has been in a wheelchair almost her entire life.

She was in Beijing, China for talks with the government on the Convention on the rights of persons with disabilities, and more specifically, legislation to improve rights for disabled people in education and the work place.

And there’s a lot of work to be done.

According to the International Labour Organisation there about 83 million people in China with some kind of disability with over 60 million of those in rural areas, where health facilities are often sparse or non-existent.

A Human Rights Watch report in 2013 said 43% of disabled people in China are illiterate, having been denied an education, despite laws which say they are entitled to one.

Rewind 60 years or so to 1950s USA and it was a similar story. Judith wasn’t able to  start school till she was nine. And even after going through University she had to sue the New York city government for denying her the right to work in education, because she couldn’t walk.

Have things improved since then?

“We’ve seen important changes in issues regarding disabled children attending school,” says Judith. “About 60% of all disabled children in the United States who have needs for special education services are spending 80% or more of their day in a regular classroom setting.”

So definite moves in the right direction. But that’s just one aspect of living with a disability. The right to an education is meaningless if you can’t actually get there.

Here in Malaysia, where I live, pathways are set quite high above street level – sometimes as high as 30cm. I’m not sure why – maybe because of the heavy tropical rain showers we get.

Either way, kerb ramps are steep to try to wheel up and often blocked anyway by a bollard to try to stop motorbikes from using the pavements.

But all this does is prevent wheelchair users and mothers with prams from being able to negotiate them at all. 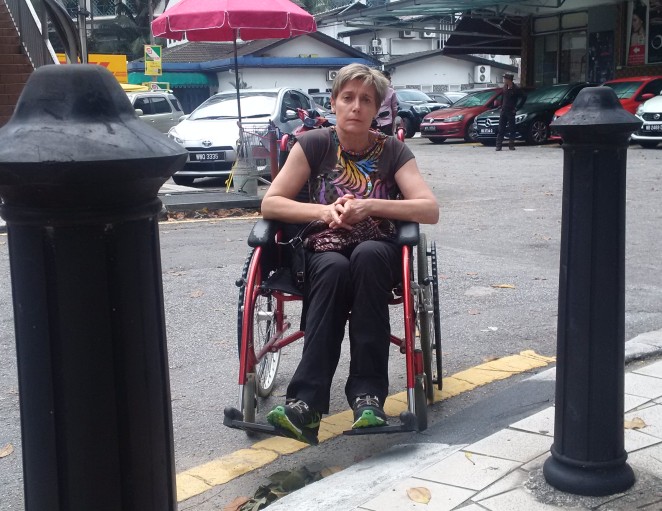 (I wanted to take a pic of some bollards about 100m away but I could only get there wheeling myself down the main street and I wasn’t convinced I’d get there in one piece.)

Judith similarly tells of careering through New York’s streets in her late teens unable to use pedestrian pathways.

“Every summer I would take singing practice and I would have to go like 20 blocks in New York City in very, very, very busy streets, primarily in the street because there weren’t ramps on the corners.”

(Fancy navigating this in a wheelchair?)

And getting around by other means of transport wasn’t any easier either.

Judith was once arrested and removed from a flight between New York and Washington because she was flying unaccompanied. The airline having decided unilaterally that they weren’t responsible for her well being in the event of an emergency.

At the time she was working for a Senator who was looking at disabled people’s rights on plane travel. The police, on discovering this, wisely decided not to press charges. Judith sued the airline, which ultimately resulted in the Air Carrier Access Act.

But this kind of discrimination is still happening today. 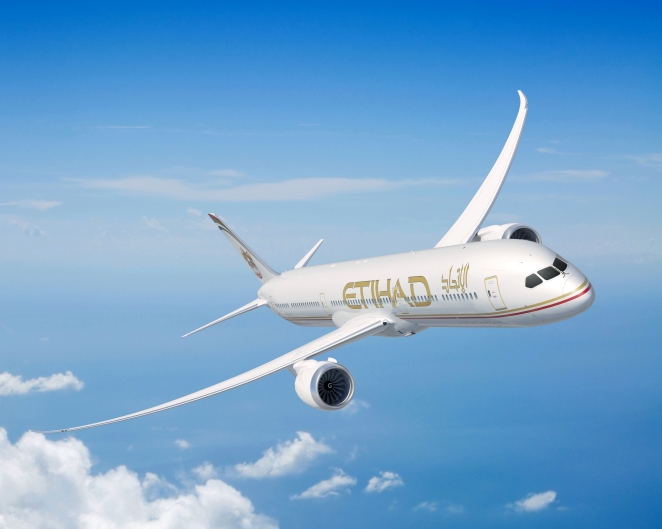 Earlier this month Etihad Airlines was forced into a public apology for preventing wheelchair bound Dwi Ariyani from taking a flight from Jakarta to Geneva because she was travelling unaccompanied.

Ariyani, ironically, was on her way to a UN convention on the rights of disabled people. And although she was eventually offered a seat on another flight the damage was done.

Maybe Ariyani should sue, but why do airlines – Etihad in this case – still think this kind of attitude is acceptable? Why is it even still happening?

I’ll blog at a later date on airlines and wheelchairs.  I’ve wondered more than once where in the queue I’d be in an emergency evacuation.

Back to the disabled in China, Judith also said the US delegation emphasised the need for civil society to be able to work legally and freely speak up on disabled issues. Something the Chinese perhaps aren’t politically ready for right now.

But Judith does believe education plays a strong role in helping society at large think about disability in a more positive way.

“Universities play a very important role in making sure that people are studying – for example in fields of architecture, or city planning, that those individuals are also learning to build communities that are universally designed to have positive impact on not just for those of with disabilities but the entire community overall.”

From my own experience architects have a lot of answering to do when it comes to their idea of what disabled friendly means.

Marina Bay Sands being just one example. (My blog page: Having a Plan B)

And just yesterday my mother was telling me about a new restaurant close to her in the UK that she thought I might like to visit when I’m there next month.

Does it have a disabled loo? I ask.

Yes, but it’s up two steps…

Marina Bay Sands says it wants to do better.

After I posted my last blog I emailed MBS suggesting some improvements they could make to their disabled friendly rooms, giving them the link to my blog.

They called me back the same day to tell me they were taking my comments seriously and would look to make changes, with the caveat it wouldn’t happen overnight. Let’s see. 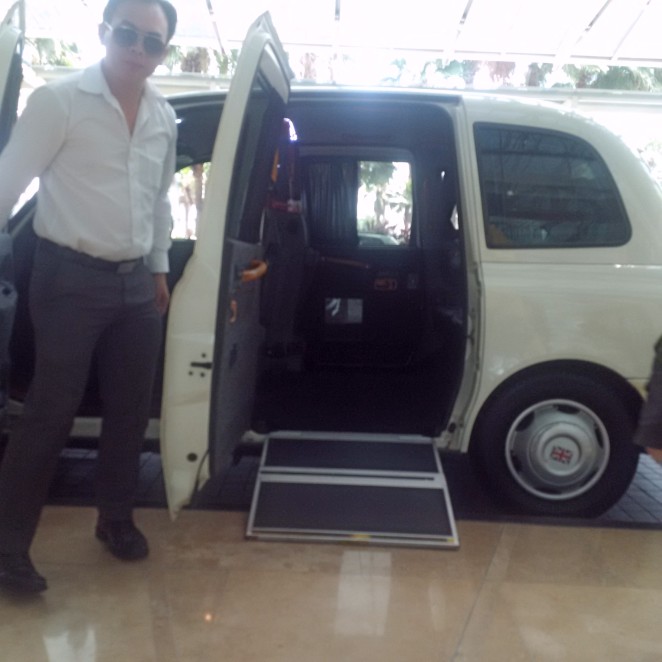 The great thing about these cabs is they’re perfect for a wheelchair, with a ramp to easily push you on board. You won’t catch me doing an Uber next month in London. 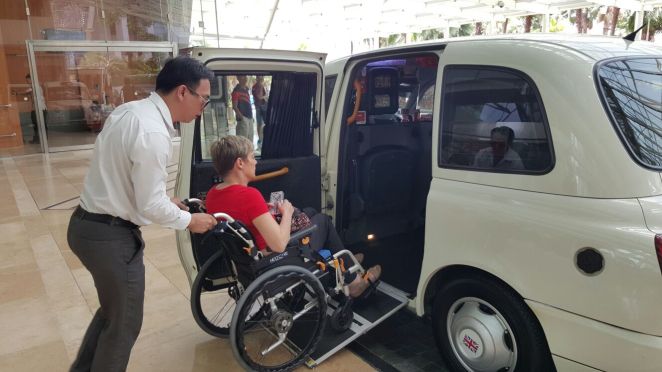 And there’s just enough room for another passenger or two 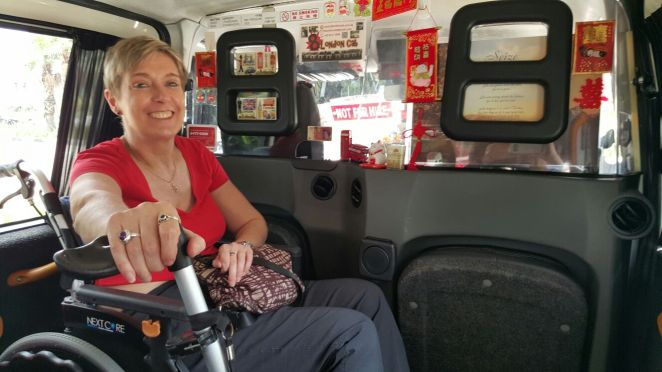 There’s the personal suitcases, the camera, the tripod, the lights, the Bgan (mini sat dish) the Aviwest (another mini sat dish), the computers, the auto cue, the vision mixer. The list goes on and on. 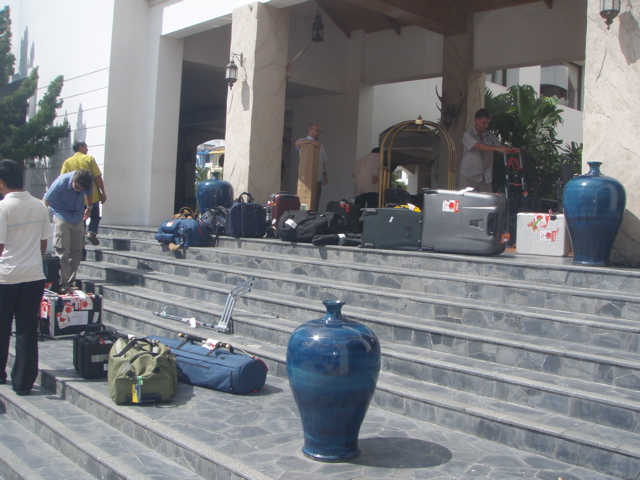 Here’s most of our stuff checking out of the hotel in southern Thailand a few years back after some live broadcasts on the insurgency. 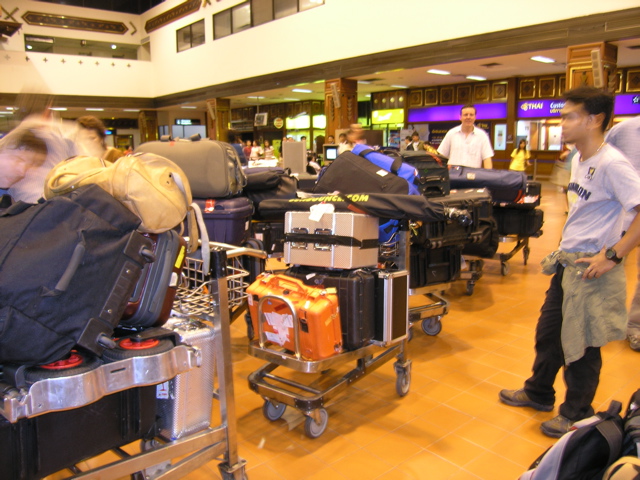 Lining up at checkin 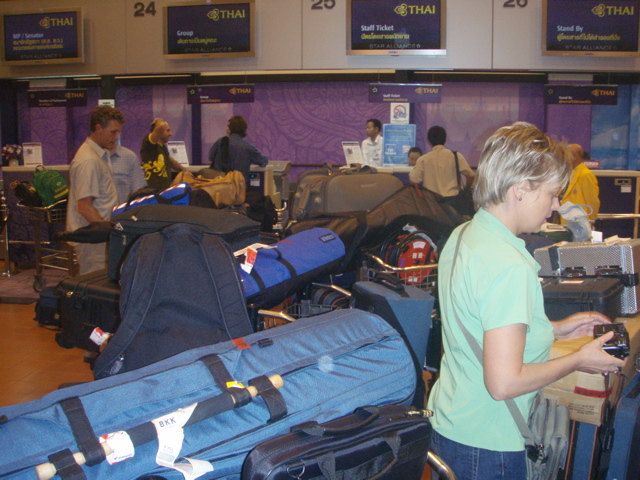 Ooh, don’t remember my hair being that blonde…

All that stuff weighed about 1000kg. I don’t remember how much we got stung for overweight but it was my job to pay for it…

And now there’s travelling when disabled… 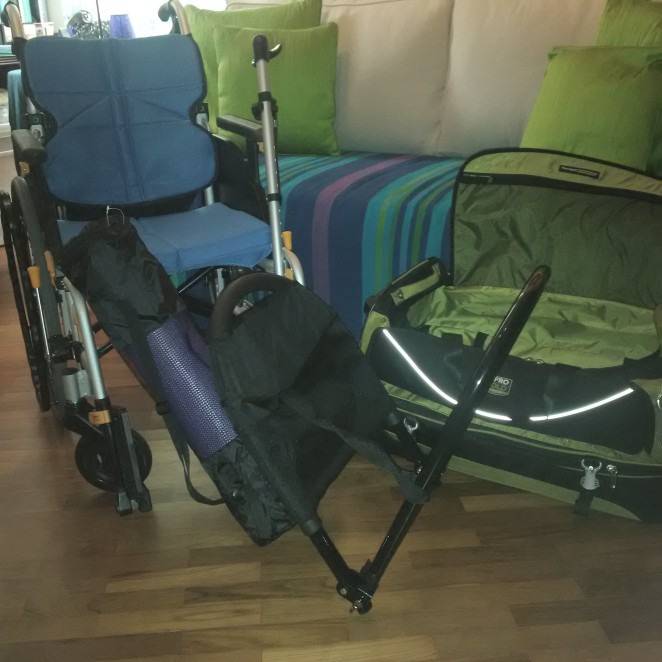 Not quite so much stuff, but they’re can’t do withouts. There’s my wheelchair (actually my travel chair – it’s a bit smaller than the average to squeeze into those narrower than normal corridors, loos, doorways taxis etc)

My walking stick – not that I’m doing much walking (I wish 🙂 )More for pushing my trainers off at the end of the day.

My yoga mat. Again not for my sun salutations or downward dogs (hate that position ) But for stopping me slipping on that deep-pile hotel carpet when getting out of bed and being unable to get back up again. (Carpets = another pet hate 😉 ).

The black V-shaped thing is a new purchase getting road tested this weekend in Singapore. It’s a mobile bed rail – the right hand bit of which just goes between the bed base and the mattress.

I bought it through these people in the UK. http://www.essentialaids.com   They don’t ship… (thanks Mum 🙂 ) 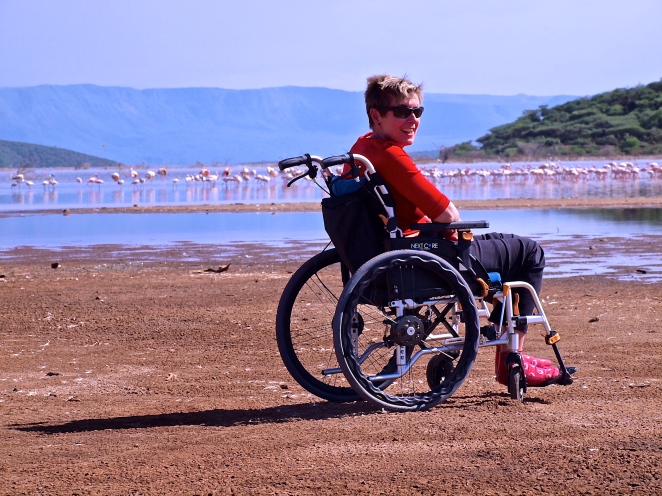 I’m in a wheelchair because I have Multiple Sclerosis. I can’t really walk any more, which kinda sucks if you like travelling as much as I do. (This pic was taken at Lake Bogoria in Kenya watching the flamingoes – which weren’t very pink!).

I wanted to create this space as a way of sharing all the annoying things that being in a chair brings, how to get round them, and maybe come up with a one-stop-shop of tips and hints, places to go, how ‘wheelchair friendly’ places are, items to buy for getting around. Useful stuff.

Readers can add their tips and suggestions.

I’m based in Asia, so my experience is going to be very different to those of you in Europe or the USA.

I’m new at this, so bear with me. Thirty years in the media does not make me a digital genius or design guru.

I live in Kuala Lumpur, Malaysia. I used to work at Al Jazeera as a producer and reporter. In  2013 I made a documentary about having MS.

If you want to know more about me having MS you can watch it here:

I’ve been a journalist my entire working life, well apart from the year being a dive bum in French Polynesia and the Philippines

It’s taken me all over Asia and beyond. Tonga, New Zealand, Australia in the south east; Korea, Japan, China, Hong Kong and Mongolia in the north; a bit of Malaysia and Singapore in between, with lastly my favourite ‘hood’ the Mekong region: Thailand, Laos, Vietnam and Cambodia. (Cambodia especially – ask my mates how much of a Cambodia bore I am)

Here’s some more of my stuff:

So what I’m gonna try to do is just blog and write as I go, and tell you how I find it. I’m off to Singapore next week for the ADEX dive show, so I’ll next update then